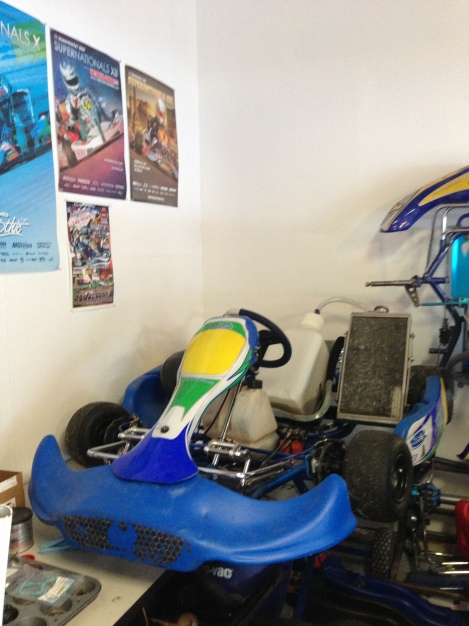 My 2012 Karting season in its natural habitat….in my garage.

Well, it’s nearly 2013, and this past year hasn’t gone quite the way that I planned. I had already earmarked 2012 as a season to regroup, refocus, and come back strong in 2013. But, that didn’t happen. As a matter of fact, I didn’t race once this year! Worse still, was the fact that I only got my kart out to the track once for practice…and that day was cut short by an electrical problem.

I pinned my hopes of racing at least once on a last-gasp effort in October, but of course we had a freakish cold snap that weekend, and the race was rescheduled for a weekend that I couldn’t attend. That officially marked the first time in 6 years (since I started in Karting) that I haven’t raced a kart at all in a given year! It sucks. It’s disappointing and a little embarrassing, but such is life.

For a number of reasons that I won’t go into, 2012 sucked for me personally…I’m quite glad to see it go. The summer had about a 3 week stretch that ruined the rest of the year for me, including a totaled car and a storm of the century that flooded my basement. By the time all of that was over, it was October and it seemed like I just blinked. The biggest highlight of my year was my trip to the Formula 1 United States Grand Prix, but that wasn’t until November.

Now it seems like all of the bad is behind me (it had better be…), and I can look forward to 2013. I have a kart that’s been totally rebuilt from the ground up, and it’s barely seen the track. I have a fun 100cc project to work on. And there’s even talk about a state racing series for Colorado (wait, we do this every year and nothing happens…)!

I’ve got some good stuff planned for this blog (and I should have time to work on it too). 2013 could be – should be – a bright year. It had better be…otherwise I’m going to go crazy.

This guy needs to race! Happy Holdays, all!